We Were Never Here 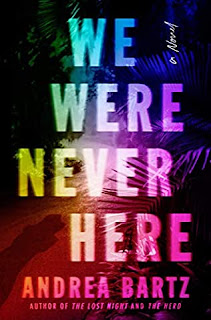 We Were Never Here by Andrea Bartz is a highly recommended psychological thriller.

Emily and her best friend Kristen are taking their annual trip, this year in Chile, when Kristen kills the backpacker she brought back to their room. Kristen says he was attacking her and she had no choice. The whole nightmare scene is similar to what happened during a previous trip to Cambodia, only that time Emily was being brutally beaten and Kristen killed the man, saving Emily. The two struggle to dispose of the body and head home, Emily to Milwaukee and Kristen to Australia. Emily, who was still trying to deal with the trauma from her attack previously, struggles greatly with this new murder and the similarities in the attacks. How could that happen twice? Once home, Emily decides to distance herself from Kristen, concentrating on her job and her new relationship with Aaron, hoping to put the traumatic experience behind her. But then Kristen shows up at her door, and Emily begins to question their relationship and Kristen's motives.

Emily, as the narrator of this novel, is clearly a troubled woman, but she is devoted to her best friend - until she isn't so sure she should be. At first, Kristen is portrayed as an overly cheerful but perhaps untrustworthy woman, and you will wonder why Emily is so devoted to her. But you may also want Emily to get a backbone and stand up for herself and her choices. The interaction between the two and Emily's emotional reactions are the basis of the novel.

The beginning of this novel is gripping and unputdownable, however, the middle of the novel is a slow moving spiral of new information and disclosures. While trying to create an atmosphere of distrust and dread, it goes on a bit too long and could have been tightened up. Kristen is increasingly portrayed as a dangerous character, although it was obvious in the beginning that something was off with her. Emily also becomes more unreliable. The creepiness increases and the drama escalates when you get to the ending, which is unexpected and riveting.