The Orphans of Davenport

The Orphans of Davenport by Marilyn Brookwood
7/27/21; 352 pages
Liveright Publishing 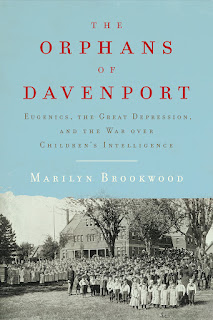 The Orphans of Davenport: Eugenics, the Great Depression, and the War over Children's Intelligence by Marilyn Brookwood is a very highly recommended meticulously researched and thoughtfully presented examination of the early psychologists in Iowa during the Great Depression who studied and challenged the prevailing thoughts concerning early childhood development and the question whether intelligence is inherited or influenced by environment.

Brookwood does an excellent job setting the historical period of time, the context, and explaining how the research and actions of these young psychologists directly countered the predominate view and stance of the established academics of the time. Their research in the 1930s at the Iowa Child Welfare Research Station resulted in a direct challenge to the universally accepted notion that children inherited low intelligence from their parents and the environment children were raised in was immaterial. It was the nature-versus-nurture debate that resulted in eventually eradicating the accepted racist and classic views of childhood development. The action that began this major breakthrough is amazing.

Psychologist Harold Skeels and his colleague Marie Skodak had two toddler girls at the Iowa Soldiers’ Orphans’ Home in Davenport, Iowa, in 1934 who both had their IQ's tested. Their IQ scores were so low they were found to be unfit for adoption. The radical choice they made to send the two girls to in institution for the "feeble minded" where the women there cared for the little girls. Much to their astonishment, the girls' IQ scores rose to normal levels, making them open for adoption. This breakthrough was repeated with thirteen other children. The individual attention and stimulating environment provided by their caregivers at the institution made the difference.

When Skeels and Skodak published their findings they were viciously attacked by America’s leading psychologists, who were also all eugenicists. Lewis M. Terman of Stanford University was the most vocal critic and he not only denounced their findings but also suppressed them. It wasn't until the 1960s that a new generation of psychologists accepted the original findings that environment influences intelligence. This helped start the field of developmental neuroscience and confirmed the benefits of early childhood education.

Disclosure: My review copy was courtesy of Liveright Publishing.