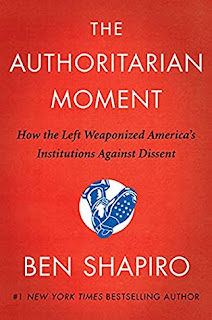 The Authoritarian Moment: How the Left Weaponized America's Institutions Against Dissent by Ben Shapiro is a very highly recommended examination of authoritarianism, where it is most prevalent, and how it is influencing society today. Shapiro clearly sets forth all of his points with examples and explanations, which are backed up by facts and an abundance of chapter notes. He also proposes how the majority must speak up to oppose the authoritarian actions of the few.

There has been a great deal of authoritarian behavior lately and the real question at this point is who is looking at the conduct of various groups or people and, from their point-of-view, determining who is right or wrong and why, as well as how they have been endowed with the job of pronouncing judgments over the rest of the country. The problem is that right now, "More than six in ten Americans say they fear saying what they think, including a majority of liberals, 64 percent of moderates, and fully 77 percent of conservatives." Obviously, the media and academia have placed themselves in the forefront as judges of what behavior and opinions they will espouse. The "mostly peaceful" protests burning down city blocks and causing up to $2 billion dollars in damage is a good example of people being told to overlook and accept. And, according to another recently released book by a researcher in journalism, the media bias is toward the liberal left in cities.

Shapiro makes a compelling case that the authoritarian left has spent decades suppressing the ideas of those who disagree with them by using people's inherent politeness against them. What this small percentage of the population doesn't seem to realize is that just because people are silent doesn't mean they are bending their will to what they are being told to believe nor are they abiding by the arbitrary rules set by them. Turning against a majority of people and demanding that they conform to your beliefs is itself intolerant and rigid. It doesn't accept the wide variety of beliefs and backgrounds, the free exchange of ideas, and most importantly our first amendment rights of freedom of speech for all of us, not just a liberal radical left leaning minority. "[B]uried in authoritarianism is always one deep flaw: its insecurity. If authoritarians had broad and deep support, they wouldn’t require compulsion. The dirty secret of our woke authoritarians is that they are the minority." "The Authoritarian Moment lays bare the intolerance and rigidity creeping into all American ideology – and prescribes the solution to ending the authoritarianism that threatens our future."