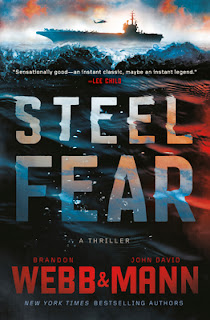 Steel Fear by Brandon Webb and John David Mann is a highly recommended military thriller set on an aircraft carrier.

With six thousand people onboard, the aircraft carrier USS Abraham Lincoln is like a small town. When Navy SEAL sniper Chief Finn hitches a ride home from the Persian Gulf, he immediately notes that there are problems in the leadership and the morale is low on the carrier. And this is before shipmates start dying. It soon becomes clear that a serial killer is onboard. Suspicion naturally falls on Finn as he arrived just before the first death and is being sent home in disgrace. Finn, a strange, self contained man, knows that he needs to find the guilty party to redeem himself and perhaps save himself.

The descriptions are amazing in the narrative, probably because Webb is a former Navy SEAL and able to add realistic details into the plot, making everything ring true. Adding to the accurate descriptions is a complex murder mystery involving a serial killer. The combination of a military thriller with a search for a killer in the narrative all works extremely well and Finn's investigation is compelling.

The description of Finn at the beginning is not that of a typical protagonist (he is described as like a marsupial) but it becomes clear that he is a man you do not want to underestimate. He may seem odd, but he is driven, determined and very intelligent. Adding to the novel are several other interesting characters. The narrative is told through the point-of-view of multiple characters. The quick, short chapters keep the pace quick and your interest high as you find yourself reading "just one more chapter" to see what happens next. The whole novel is well-written, the plot is intelligent, and it feels ripe for a sequel.

Disclosure: My review copy was courtesy of Random House.