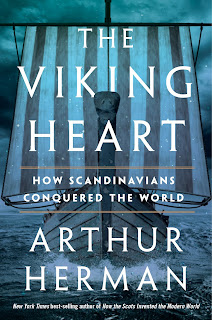 The Viking Heart: How Scandinavians Conquered the World by Arthur Herman is a highly recommended history of the Vikings, their influence in Europe and beyond, and eventually how the mind set of the Scandinavians influenced American history. This is a history written with ties to Herman's own family heritage.

As most people know the Vikings, Norwegians, Danes, Finns, and Swedes, were raiders who sparked terror across Europe and east Eurasia for more than two centuries after 780 C.E. and shaped the history of these areas before they settled down to becoming settlers and traders. These Norsemen were never part of one national identity and represented a very small population, which makes their impact even more interesting. What set them apart was that where ever they went they brought with them a certain attitude, way of life, and mythology. Herman also shares archaeological and DNA research to trace the movements and reach of the Vikings.

As this is a history focused on Scandinavians, the peoples comprising these countries are the focus of the book. Their bold actions, raids, travels, movements, mythology, communities, families, inventiveness, and adventurous spirit are the focus of the history from the early time of the Viking to the contributions of settlers in America. Once in America, Herman covers the role the role these settlers played in American history along with several famous descendants of Scandinavian ancestry. The part that many Scandinavians will stand up and applaud is the clear presentation of how Snorri Sturluson's Eddas and guide to Old Norse Mythology influenced so many parts of popular culture today, especially Tolkien's Lord of the Rings.

The narrative is very accessible to readers wanting a basic account of Vikings and their descendants in America rather than an encyclopedic history of all things Viking and Scandinavian. Those who are looking for a complete in-depth examination of the history can look for further information, but a causal reader will appreciate this presentation. Herman states that he wrote this book to examine and pay homage to his ancestors, so he does make the book personal, naming his Scandinavian relatives and sharing personal family stories. The volume includes chapter notes and an index, as well as photographs.

Disclosure: My review copy was courtesy of HMH Books.