The Stranger in the Mirror

The Stranger in the Mirror by Liv Constantine
7/6/21; 336 pages
HarperCollins 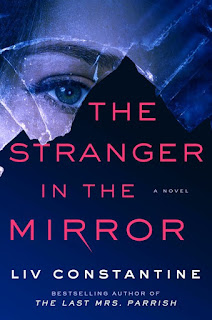 The Stranger in the Mirror by Liv Constantine is a recommended psychological thriller.

Addison Hope, not her real name, doesn't know who she really is. Two years ago she was found at the side of a highway in New Jersey by trucker Ed. She was obviously hurt, had no ID and no memory. Ed took her home to Philadelphia and his wife Gigi. The two get her into a doctor and then help her try to start her life again. Now she is engaged to Gabriel and about to have an exhibit of her photos at his family gallery. She loves Gabriel and should be happy, but she is still having occasional flashbacks to horrible memories, but she has no context to place them in, so she is staying quiet, afraid she did something awful in her past. At the same time Julian, a doctor in Boston, has been searching for his wife, Cassandra, for two years. Their daughter, Valentina, now 7, misses and needs her mother.

The chapters flip back and forth between several different character's points-of-view in short chapters that will propel you to keep reading. The sisters who are Liv Constantine know how to keep you reading and build suspense. There is no question that the plot will keep you reading, however you will also have to very firmly set your logic and disbelief aside to stay with the plot. I had several eye-rolling moments and scenes that had me muttering early on - and it just got worse as the plot continued. I had my suspicions the direction the plot was going to take, but hoped I was wrong. When we got to the last section I knew exactly where the plot was going and wasn't pleased to be correct. The opening was what kept me reading but the increasingly absurd plot elements left me wondering why I stuck it out when I reached the ending. I'm recommending because I did finish it, and some of the characters were well-written and interesting.

Disclosure: My review copy was courtesy of HarperCollins.
Posted by Lori L at 5:27 PM