The Stranger Behind You

The Stranger Behind You by Carol Goodman
7/6/21; 336 pages
HarperCollins 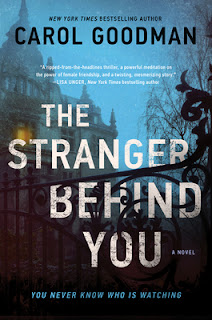 The Stranger Behind You by Carol Goodman is a recommended atmospheric thriller.

Joan Lurie is the young journalist who wrote the exposé that uncovers the actions of sexual predator Caspar Osgood, the powerful owner of the Newspaper Global. Joan is attacked outside her apartment the night the story breaks and for her safety she moves into the Refuge, a new high-security apartment after accepting a large advance to expand her research into a book. Joan is still suffering from after effect of the attack. She meets her elderly neighbor, Lillian Day, who is hiding out in the Refuge too. Lillian begins to visit Joan daily, telling her life's story. From her Joan learns that the Refuge was once a Magdalen Laundry, and Lillian has hidden there before. Unknown to Joan, Melissa Osgood, moves into the apartment below Joan. Osgood took his own life a few days after the story broke, leaving Melissa humiliated, in debt with a besmirched social standing. She wants revenge and plans to try to discredit and sabotage Joan's story.

This begins as a Me Too novel and then morphs into something else that is close but not quite on point. When Joan is attacked, blacks out from a head injury, and then has her vision impaired but still does not report the attack or go to the doctor, it was so unbelievable that I couldn't set disbelief aside. In some ways this was good due to the rest of the novel being sort of a mishmash of implausible plot points and actions by the characters. Once I accepted that this was not going to be a realistic story, it was easier to go with the flow of the plot and the improbable narrative elements and actions of the characters. Both Joan and Melissa needed professional help. The three story lines eventually coalesce into the final denouement. Lillian's story was not quite as mesmerizing to me as the narratives of Joan and Melissa and felt too overdone and drawn out. Certainly men abusing and exploiting women by men is a theme but the lead up to the conclusion requires you to set aside all logic and disbelief in order to appreciate the novel.