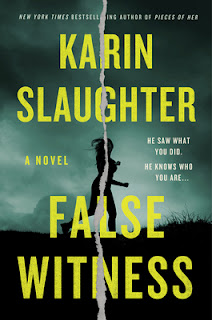 False Witness by Karin Slaughter is a very highly recommended intense, gritty, complex, and excellent standalone crime thriller. Slaughter has done it again; this one of the best thrillers of the year. Right at the start False Witness was unputdownable. It grabbed my attention immediately and only continued to get better as the complications multiplied.


Leigh and Callie Collier are sisters who have been running away from their abusive childhood for years. In the summer of 1998 when the two were teens, Callie was viciously attacked by the father of the boy she was babysitting. Fighting for her life, Callie fought back. When called, Leigh immediately came to help her sister deal with the clean up of the situation. Now Callie is an addict, trying to numb her pain while Leigh is an attorney who has recently join a large Atlanta law firm, although she tries to sabotage her happiness. Although she is separated from her husband, Walter, the two still care for each other and amicably parent their daughter Maddy. When Leigh receives a phone call from one of the firm's partners while at her daughter's play, she is perplexed why she as a lower level attorney, was called. When she arrives at the firm, however, Leigh realizes why the client, Andrew Tenant, fired his attorney and asked for her. He recognizes her as the sister of his babysitter twenty-three years ago. It becomes clear immediately that Andrew is a violent psychopath, guilty of the current brutal murder as well as others, and wants her on the case for reasons beyond her legal prowess.

The characters of Leigh and Callie are skillfully portrayed as realistic and complex characters. Opposites in many ways, they both experienced a difficult childhood with their mother and their own actions. They both feel like real people and their relationship is as complicated as their history, but they are always there for each other and share a bond. Their devotion to each other and their willingness to risk everything to protect the other sister is clearly depicted through out the novel, both in their past and present. Andrew is a particularly creepy, evil, and frightening character who will make your skin crawl. As you learn what seems to be his plan, what he is demanding, some other fact will come to light and predicting what will happen next, what he is planning, is impossible.

This is a masterfully written novel. As the plot unfolds, the complications add up and the already convoluted twisty plot becomes even more intricate. The nail-biting suspense grows with each chapter. The narrative alternates between point-of-view of Leigh and Callie. Both narrative threads are equally compelling. While reading the thoughts and perspective of one sister, you will be wondering what is happening to the other sister. And you will not be able to predict the twists and the direction this novel is taking. For readers who need to know, you should be forewarned that this is a violent novel, and it should also have a language warning.

Slaughter has incorporated the pandemic into the plot and some current events were mentioned in False Witness. I say this because I normally I like novelists to leave current events and opinions out of the plot and have been known to lower a rating due to that. Strangely enough, even though I took note of this, it didn't bother me this time. The novel is just that good. Once I finished the novel and got to the note at the end, Slaughter address this issue and why she did it.