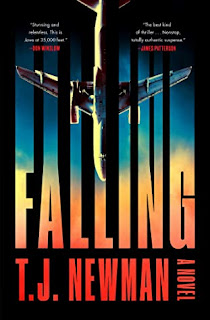 Falling by T. J. Newman is a very highly recommended intense and shocking thriller that will leave you frantic to reach the end. It also resulted in a personal oath to avoid flying again.

Coastal Airways captain Bill Hoffman is called in by his superior at the last minute to take over Flight 416 from LAX to JFK Airport. Soon after the plane is airborne, he gets an email from his wife, Carrie consisting of a photo showing her and their 10-year-old son, Scott, taken hostage in their living room, with their faces hooded and Carrie strapped with bombs. After this he receives a FaceTime call from Saman Khani, the kidnapper. Khani demands that Bill must make a choice between crashing the plane with 149 souls aboard or the terrorist will kill Carrie, Scott, and Elise, the Hoffmans’ 10-month-old baby. He is also instructed not to tell anyone, or his family will die. Bill's response is that he will not crash the plane and Khani will not kill his family. How Bill can manage to save his family without crashing the plane will take all his experience and intelligence, as well as that of his trusted crew to make it happen.

The diverse cast of characters are all portrayed as complicated, real, and credible people. You will care about them and be invested in their survival. The actions everyone takes to ensure no one dies and the reactions of the characters are believable. I'm sure this is due to Newman's career as a flight attendant, so she knows procedures and reactions of passengers. I can't wait for her next novel!

This is an unputdownable, shocking, frightening thriller that keeps up a lightning-fast pace throughout the whole novel. The writing was exceptional in this debut novel, providing the details while keeping the anticipation and suspense high. I was invested in the outcome and breathless as the drama kept increasing the tension. This excellent novel reads like an action movie and is a perfect summer read - although not if flights are involved. You will stay up late to finish Falling, no caffeine required.


Disclosure: My review copy was courtesy of Simon & Schuster via Netgalley.
Posted by Lori L at 3:55 PM