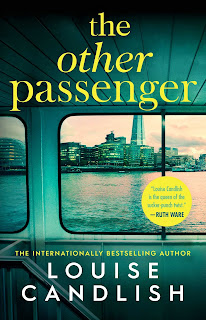 The Other Passenger by Louise Candlish is a highly recommended psychological thriller.

Jamie Buckby first meets the younger couple Melia and Kit through his partner, Clare. Clare invited the couple over one evening after she met Melia through work. The evening was enjoyable and that was when Jamie talked Kit into joining him in taking the ferry from St. Mary's into London rather than the London Tube. Jamie was once a marketing executive, but after he had a terrifying panic attack on the London Tube, he became a barista. Clare, however, is a real estate agent who is doing very well and they live in a high end home owned by her parents, so she has been understanding, to a point, about his sudden low-paying job. He and Kit start taking the ferry together and quickly form a small group with two other commuters, Steve and Gretchen. Soon it becomes clear to Clare and Jamie as the lives of the two couples become more entwined that Melia and Kit are drowning in debt, living way beyond their means, and Kit may have a drug problem. Soon things become even more complicated.

Jamie is the narrator. He starts out as an average likeable man, who is approaching 50, but soon it becomes clear that he may not be a reliable narrator or even the man you think he is. His actions, as well as the actions of other characters, might surprise and shock you as the novel continues and the deceptions mount. The description of Jamie's panic attack in the tube is remarkably captured and you will feel empathy for him that will later be sharply contrasted with his other actions.

This is a very well-written, absolutely irresistible and closely planned and plotted psychological thriller. Everyone is scheming in some way and they all have secrets to hide. The narrative is wonderfully complex, full of details that you need to pay attention to in order to fully appreciate events that will occur later in the novel, because nothing is exactly as it seems and there are clues everywhere. The middle of the narrative slows down as far as action, but there are still details you need to take note of while reading. The final denouement is wonderfully twisty.

Disclosure: My review copy was courtesy of Atria Books.
Posted by Lori L at 1:30 PM