After We Were Stolen

After We Were Stolen by Brooke Beyfuss
7/19/22; 400 pages
Sourcebooks Landmark 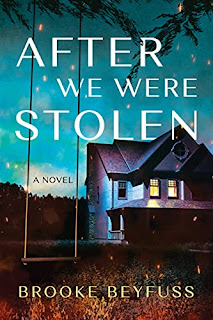 After We Were Stolen by Brooke Beyfuss is a highly recommended psychological drama.

Avery, nineteen, lives in a doomsday survivalist cult with the eleven other members of her family. Her grandfather started the cult but now her domineering father is the leader and her family comprise the only remaining members. Avery is closest to her brother Cole, sixteen. The cult excels at indoctrination and abusive and cruel actions. When a fire breaks out destroying the entire compound and the other family members, Avery and Cole manage to escape and flee. They live on their own for three months before they are caught shoplifting. Now the novel switches gears.

Through their fingerprints it is discovered that Avery and Cole are not who they think they are. Both of them were abducted as children. Cole has a family who immediately arrive to take him home, while Avery is taken to a women's shelter where she can be safe and hopefully recovery from the trauma. At the same time the police are investigating the fire and questioning her.

This debut novel is suspenseful, emotionally fraught, and several parts of the narrative that are very disturbing. The beginning of the novel covers the family cult, both the indoctrination used and the activities. Abuse is clearly present and described. After the fire, the novel switches gears to escape and recovery, which is in many ways just as psychologically and emotionally fraught as being in the cult.

Avery is a fully realized character with emotional depth. As Avery struggles to recover, she must recall all the events that happened and deal with them. You will wish the best for her and hope she can live a normal life after her experiences.

This is a well written psychological drama with an even paced plot. It should be noted that there are several disturbing scenes and an author's note at the beginner warning readers about the content. The ending seemed a bit abrupt and could have used a postscript or afterward showing us that Avery is recovering.


Disclosure: My review copy was courtesy of the publisher/author.
Posted by Lori L at 12:48 PM