The Couple at Number 9 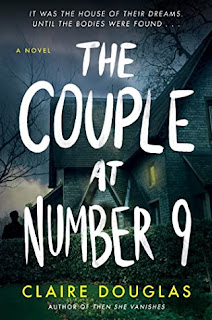 The Couple at Number 9 by Claire Douglas is a highly recommended psychological thriller.

Saffron (Saffy) Cutler and her boyfriend Tom are thrilled to inherit a home at 9 Skelton Place and start renovations immediately. When the builders uncover human remains, the police are called in and the investigation reveals that there are two bodies buried in their back garden. It seems that they have been buried there for at least thirty years. The investigation turns to Saffy's grandmother Rose Grey who owns the cottage and lived there during the time period that the bodies were likely buried. The problem is that Rose has been diagnosed with dementia and lives in a nursing facility.

What seems to be a horrifying discovery, but one that is removed from the current residents picks up the pace when it seems that not everyone who knows what happened thirty years ago is content to stand by and do nothing. And then Rose, whose memory seems to come and go, is being questioned by the police. She remembers something, but what exactly is unclear.

The plot unfolds through multiple points-of-view and in multiple timelines. The tension builds up as more information and background is revealed in both timelines. The interest is in how the stories from the past and present are going to explain the bodies and in the identity of the person who is trying to stop any information from being released.

Several interesting characters are presented and depicted as realistic individuals in the plot through their individual points-of-view. There are plenty of secrets among the characters and some of them pertain to the murders. This helps keep interest high and increases the tension in solving the mystery and discovering the identity of the killer.

I was totally engrossed until the narrative took a convenient turn and then a twist occurred that felt a bit too contrived. The pacing does seem a little slow at times, but it still held my attention and I kept reading. Basically this is an enjoyable, compelling psychological thriller. The multiple points-of-view work well in The Couple at Number 9 and keep the tension going right to the end.

Disclosure: My review copy was courtesy of  HarperCollins.
Posted by Lori L at 1:57 AM