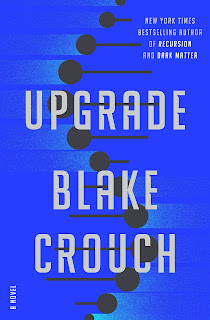 Logan Ramsay works for the GPA, Gene Protection Agency, perhaps to atone for his mother's actions. Two hundred million people died when Miriam Ramsay used a biological DNA modifier system in an attempt to eliminate a leaf blight on a rice plant. The virus she created in locusts was responsible for the “Great Starvation” and devastated the world’s rice supply as well as other crops. Logan spent time in prison for his role in this since he was working for her as an intern. Now his job is to stop scientists who are creating genetic modifications that are risky and could wreak havoc on the ecosystem.

In a raid on an illegal lab Logan is infected by a virus that carries a payload encoding the most powerful genome-modifying system ever created. It has been designed specifically for Logan and infects the cells in his body editing and rewriting portions of his DNA. The result is a change in Logan. He is enhanced mentally and physically. He can read, recall facts and details, concentrate, and engage in multitasking easier. When his enhancement is noticed, government agents lock him up.

When someone breaks him out of the facility, it is revealed that his mother didn't die, as he always though. She was still working and choreographed this enhanced intelligence to preserve the human race. Now Logan needs to stop the plan that has been set into motion to significantly upgrade the human species.

Logan Ramsey is a fully realized character and narrates the action. Readers will sympathize with him and understand the complexity underlying the moral questions he is confronting, as well as the sacrifices he is facing.

Upgrade is an exceptional, engaging and entertaining science fiction novel. Once you start reading you will be unable to set this compelling novel down. The intricate plot features heart-stopping suspense while moving at a rapid pace. The concept behind the plot is believable, which makes it alarming, and as the plot develops it becomes even more irresistible, credible, horrifying, and, ultimately, unforgettable. I was totally entrenched in the plot from beginning to end.

Excellent novel and certainly one of the best science fiction/thrillers to come out this year. Crouch has put the science into his science fiction. Don't miss Upgrade, especially if you are a fan of science fiction and Blake Crouch.

Disclosure: My review copy was courtesy of Random House via NetGalley.
Posted by Lori L at 11:19 AM