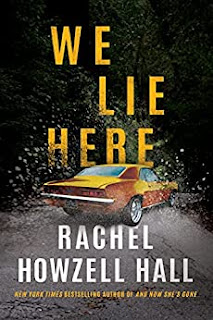 We Lie Here by Rachel Howzell Hall is a recommended domestic thriller.

Yara Gibson, a writer on a television crime drama, reluctantly leaves L.A. and returns to her childhood home in Palmdale, California, to oversee her parents’ 20th wedding anniversary party. Her 19 year-old sister can't help in any constructive way. Her dominating, bossy, and demanding mother wants a party, so Yara feels pressured into making sure she gets what she wants. Adding to the stress is the fact that Yara is asthmatic. The desert dust storms already present a problem, but her mother's demand that Yara stay at the family's home among the pervasive cigarette smoke surely mean nothing but wheezing and struggling for the next breathe.

Then, soon after her arrival, a stranger sends her a text saying, "I have information that will change your life." The message is from a woman called Felicia Campbell, who claims to be a childhood friend of Yara’s mother. She is insistent that the two have to talk. She leaves a key to remote lakeside cabin for Yara, but soon after this Felicia's body is found. What is the big secret and who would kill Felicia to prevent her from telling it to Yara.

Yara is the narrator of the novel and she is a completely realized and sympathetic character. She is really the only appealing character in the novel. She is likable, which kept me reading, but at the same time, there are a couple of fundamental questions that immediately came to mind. The first is the reliability of Yara as a narrator. She has admitted she's forgetful and has anxiety issues. The second is her maturity or inner strength. She is seemingly incapable of saying no to her mother. She didn't just tell her mother: No, I am staying at the hotel. I am trying to quit smoking and will not stay at the smoke filled house. Additionally, her mother demanded that Yara throw her big party for a 20th anniversary, not a really common thing to do.

Disclosure: My review copy was courtesy of Thomas & Mercer via NetGalley.
Posted by Lori L at 6:01 PM