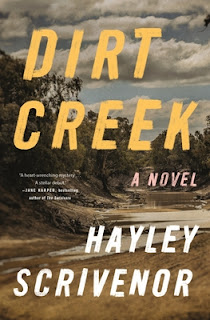 Dirt Creek by Hayley Scrivenor  is a recommended debut mystery and procedural set in Australia.

In the opening we know her body has been found, as witnessed by the children who knew her. Following this is the investigation that begins when twelve-year-old Esther disappears on the way home from school. Detective Sergeant Sarah Michaels arrives in town to investigate Esther's disappearance and the whole community is thrown into the investigation. Esther's best friend, Ronnie, is determined to find Esther and bring her home.

Chapters are told through different points-of-view, including chapters titled "we" which represents a sort of Greek chorus composed of the children of the community watching and observing the death and investigation of Esther. It becomes clear as the investigation unfolds that everyone isn't telling the truth and that people have secrets they want to keep hidden, no matter the costs to the whole town. The children are honest with their insights, but also with their reasons to keep silent.

The action and tension in Dirt Creek builds very slowly and gradually as suspects are set apart and more information is gradually revealed by the children and the community. Media attention and the police investigation make those who could reveal more information even more reticent to do so. The personal lives of the families and their children is part of the narrative, and is also heartbreaking at times. Ronnie's chapters are the most moving because Esther was her best friend and it is clear that she misses her friend.

This is a character driven mystery. The children are sympathetic characters although also repetitious, while the adults are less sympathetic and more disagreeable. Several of the adult friendships are an important part of the narrative, but their friendships are also brought into question. The town itself is a desolate and destructive force among the residents.

The quality of the writing is quite good, but the actual slow progress of the plot inhibits the insights from making a big impact in the overall presentation of the narrative. It should be noted that there is a lot of violence in the plot that is off-putting and not necessary. The plot needs tightening up and a clarification of the direction the narrative is taking. additionally, it is never necessary to add everything you have big feelings about to one novel.

Disclosure: My review copy was courtesy of Macmillan via NetGalley.
Posted by Lori L at 1:54 AM