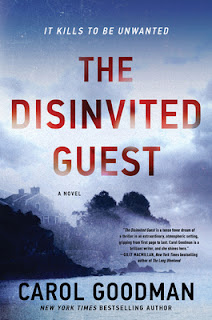 The Disinvited Guest by Carol Goodman is a recommended Gothic thriller

It's around 2030 and a new virus has surfaced. Lucy Harper's husband Reed has invited a small group of five close friends and family to isolate themselves on the island that he and his sister Liz own off the coast of Maine. In the 1850's Fever Island was a quarantine site for Irish famine ships and it has a history of stories claiming it is haunted. They have stock the island with supplies and now plan to wait out the new quarantines in isolation. But the history of the island where stories of witches, ghosts, and other spooky beings abound weighs heavy on everyone and when odd occurrences and strange signs begin to appear, the group is on edge. And then it seems that sabotage may threaten the group’s survival.

There are several things that were done right in The Disinvited Guest. The quality of the writing is excellent. The idea of isolating this group of characters on this creepy island is a good concept for a Gothic horror thriller. Providing the island with a tragic history is well played, as are the journal entries from the 1850's included in the plot. The increasing tension and suspicion created as strange occurrences that seem to be supernatural happen, like seeing the Grey Lady, work well. Suspicions are cast upon almost everyone. There are several twists and a surprising ending.

Two major strikes against The Disinvited Guest. First, the characters are truly annoying and not very credible. There were several times I had to suspend my disbelief.  Second, this could have been set during a long summer vacation rather than a new plague ten years in the future. The whole concept of "Oh, there is a new pandemic and we must be full of fear" in this novel lost points with me immediately. Pandemic fear fiction is an ill-advised choice to make as a plot element, no matter how inconsequential it may be to the overall narrative. It is also a senseless and annoying concept for the many people who worked as usual throughout the whole event.


Disclosure: My review copy was courtesy of HarperCollins.
Posted by Lori L at 11:40 AM