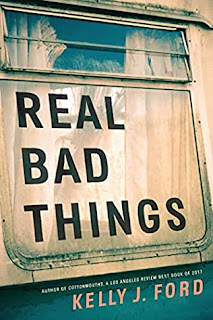 When Jane Mooney confessed to killing her abusive stepfather, she was let go because there was no body. Now twenty-five years later remains have been found and Jane has come home to Arkansas to face jail time. But there are irregularities found and it seems that the case is bring more questions to light and it is suspected that others may have been involved.

Jane has to deal with her truculent mother who is more concerned about who will pay for the funeral rather than her estranged relationship with Jane and her son Jason. Jane was called “Lezzie Borden” at the time of her confession and the attitude toward her remains. Then when others confess to the crime, the real case is searching for the truth about what happened all those years ago.

Jane and her friend from years ago, Georgia Lee are narrators and the plot unfolds through their points-of-view. The characters are portrayed as realistic individuals, but aren't deeply developed so I didn't feel a connection to them. The child abuse present in the story felt excessive. Furthermore, there is simply too much pointless dialogue, which made the novel feel overly long.

Plenty of clues are provided along the way that point to the truth, although they are disguised. I wasn't really invested in the story, however, and really questioned the name calling involved in the plot. Additionally, the novel is more concerned with trying to throw in various surprises and twists than making a truly unpredictable plot. It was a bit too predictable.


Disclosure: My review copy was courtesy of Thomas&Mercer via NetGalley.
Posted by Lori L at 1:16 AM