The Frederick Sisters Are Living the Dream

The Frederick Sisters Are Living the Dream by Jeannie Zusy
9/20/22; 320 pages
Atria Books 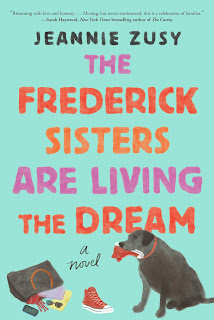 The Frederick Sisters Are Living the Dream by Jeannie Zusy is a highly recommended novel that explores the relationship between sisters and the complications that can arise from being the caretaker for one of your siblings.

Maggie Frederick, the youngest of three sisters, realizes that it is up to her to take on the care of Ginny, her diabetic older sister with intellectual disabilities after Ginny nearly died from sepsis. Their oldest sister, Betsy, is off living in California. Ginny must be moved from Maryland to a nursing facility near Maggie's home in New York and her surly dog must move in with Maggie and her pets. Ginny, who is now in a wheelchair, is uncooperative, refuses to follow the rules, and won't curtail her sugar consumption.

As she tries to deal with Ginny's truculence over her care and health, Maggie is also trying to work her freelancing job, raise her son still at home, and deal with her separation from her husband. The struggles of dealing with a loved one with an intellectual disability is portrayed realistically, however, I wouldn't necessarily describe this as a novel that will have you laughing throughout.

The narrative is told through Maggie's point-of-view in a stream-of-consciousness style that requires and assumes that you to feel an affinity for her immediately. She has way-too-much she is expecting herself to do and accomplish, which makes the connection a challenge in some ways. The narrative does drag a bit and depends upon your interest in the character's situation to propel your involvement forward. At times this wasn't quite enough. Some of the shortcomings in the novel are rectified or at least explained while others remain. 3.5 rounded up

Disclosure: My review copy was courtesy of Atria Books.
Posted by Lori L at 9:19 PM