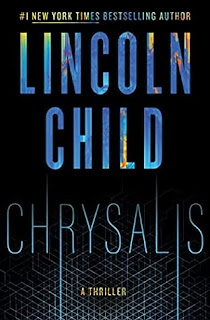 Jeremy Logan is an enigmalogist, or, as he explains it, he is an investigator of unexplained things or solves problems nobody has encountered before. Jeremy has been called by Chrysalis, the global multi-billion dollar tech company, to investigate a threat to the update rollout of a major update of its product. They make optical devices that use virtual reality on a wide scale. It appears, after an anonymous message is sent, that the death of a board member was not an accident and can be attributed to their newest version of the Omega product. This is quickly followed by the death of two more board members.

Logan arrives at the facility of Chrysalis and meets with the legal counsel and various executives, which culminates with his receiving complete authority to investigate and ask questions of anyone in the facility. The fear is that someone has program the Omega to kill its users. Logan must use all his intelligence and skills to figure out what is happening and who is killing board members while threatening to kill more.

As expected, Chrysalis is expertly written, with a well researched and intricate plot. Child brings to life the high tech world behind the creation of the Omega VR device and their medical implants. The tension and intrigue is palpable as Logan's investigation evolves and he scrutinizes all areas of the tech company. Expect a lot of tech-talk in this one as that is the focus of the story and the direction of the future.

At this point, fans of the series know Logan and his previous cases, but Chrysalis can be read as a standalone novel. Logan is introduced along with a host of other characters as the investigation unfolds. Long time readers of the series will enjoy this latest addition.

Disclosure: My review copy was courtesy of  Knopf Doubleday via NetGalley.
Posted by Lori L at 11:35 AM