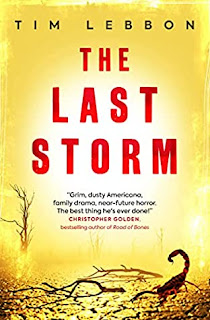 A large area of the Great Plains in North America is now known as the Desert after years of drought. The people remaining in the area have a hard scrabble, bleak existence between the famine and drought.  Ash is a young woman traveling around the vast wasteland looking for parts that she needs to build a rain making device. The parts she needs will call out and sing to her. She is one of the mythical Rainmakers.

Jesse made and wielded a rainmaking device of his own. The last time he made it rain, he brought forth not only water, but also venomous scorpions, snakes, and spiders. After this he has eschewed using it again. Now he lives alone. Ash is his daughter and inherited his abilities, but Jesse believes she is dead. When his estranged wife Karina unexpectedly arrives, informing him that Ash is still alive and planning to start rainmaking, the two set out to find her. But they aren't the only ones looking.

The opening of The Last Storm tells of the last time Jesse used his device. The narrative clearly describes the process to make it rain, but also the horror which followed. It is understandable why he hides from the world, why he would not want Ash to make a device. Ash on the other hand is completely in thrall to her need to make a device. The need is in her blood and she is compelled, one could say born, to do this. This is her coming-of-age story, but as with any story of maturation there is always a hurdle or challenge that must be confronted or overcame.

This is an excellent, compelling, and harrowing horror novel that should appeal to many readers. The characters are all fully realized and portrayed with a rich depth and understanding of human nature. It is their development and portrayal that make this a powerful, atmospheric novel. Chapters alternate between the point-of-view of multiple characters. This helps the plot move along quickly while developing the characters and describing the changed landscape they live in. The parched land itself becomes a character as any lush plants are long dead while nasty devil grass thrives. (I have a few qualms over some minor plot points that most readers will likely accept or overlook.)

Disclosure: My review copy was courtesy of Titan.
Posted by Lori L at 2:03 PM