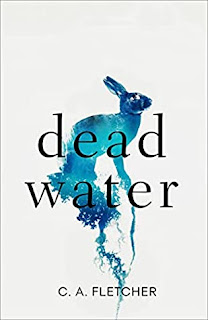 Dead Water by C. A. Fletcher is a highly recommended folk horror novel of a blight in a small island community.

Set on a small remote island off the western coast of Scotland is an amicable community of residents, some island born going back generations while others are new to the island. All of them have their secrets, however, some secrets are more ominous than others. When the island ferry service breaks down and communication to the mainland is lost, the residents must try to work together. This becomes increasingly difficult when a mysterious infection begins to spread and rumors begin to circulate.

I loved A Boy and His Dog at the End of the World, and Dead Water doesn't live up to it, but it does have strengths of its own. It must be said that there is a very slow start to the novel, which is potentially off-putting, but it does serve to introduce the characters before the subtle psychological horror begins. Then this becomes a narrative that showcases perseverance in the face of hardship while also creating a sense of dread and horror that will build.

The characters secrets are carefully exposed and their flaws shown. They aren't likeable, but they are portrayed as realistic individuals. And this is the strength of the novel, the carefully crafted characters that are then placed in a horrific, frightening situation, which is portrayed with the same level of care. 3.5 rounded up because of all the positives, however the slow setup is too tedious and the novel loses your attention. I will look forward to Fletcher's next novel.

Disclosure: My review copy was courtesy of Orbit via NetGalley.
Posted by Lori L at 1:28 AM