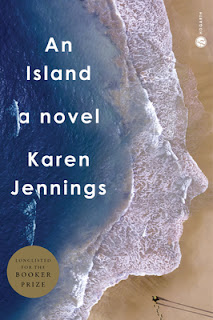 An Island by Karen Jennings is a highly recommended allegorical novel of a light keeper on an isolated island who has a stranger wash ashore.

Samuel has live on a small island as a lighthouse keeper off the coast of an unnamed African country for many years. He tends his garden, builds his wall surrounding it, cares for his chickens and the lighthouse, and buries any bodies that wash ashore. When a stranger washes ashore still alive, Samuel manages to get him up to his home. The stranger seems to be recovering, leaving Samuel uncertain what he should do.

He vividly remembers his former life on the mainland where he was a political prisoner and his country was exploited under colonial rule. After a revolution, his country won independence, but this did not change the suffering of the people. The stranger induces in Samuel pondering and reminiscing about events that have occurred in his past. Samuel knows how fickle people and governments can be, and how only certain lives are actually valued, those who can promote the current regime and their plans.

The narrative follows Samuel recalling his past and trying to live with the stranger. This is really a character study of an old man who has seen enough in the past to doubt what the present has to offer. He is used to being alone and having this stranger living with him on his island is jarring to his sensibilities, but is also causing Samuel to remember events from his past. This juxtaposition of past and present results in mistrust and resentment in Samuel over the stranger which can be akin to the struggles of his unnamed country.

This is a bleak, forlorn novel written in spare prose and meager but essential details. The tension and foreboding runs high, although nothing occurs in the present day to warrant it, Samuel's imagination and reflections on the past are brought to the forefront of the present. 3.5 rounded up

Disclosure: My review copy was courtesy of Hogarth Press via NetGalley.