The Favor by Nora Murphy 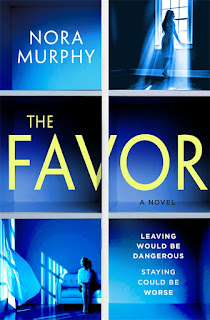 The Favor by Nora Murphy is a highly recommended psychological thriller.

Leah and McKenna both have abusive spouses and are leading the same horrific existence, although they don't know each other. Leah is the one who first notices McKenna and recognizes someone who is in an abusive relationship. She begins to secretly spy on McKenna and her husband Zach. When she sees an act of violence perpetrated by Zach toward McKenna, Leah intervenes, altering the fate of both women's lives. Which is good because Leah could use someone who is watching her husband, Liam, and his violence toward her.

Leah and McKenna are fully realized characters who will elicit a lot of sympathy. Their situations are clearly very similar, where their husbands are controlling their every move, leaving them basically prisoners in their homes and marriages. they are both well educated professional women who have found themselves not working and living a life of leisure that they don't necessarily want. The husbands, Zach and Liam are less developed as characters, but this works in the situation that Murphy has set up for her heroines. Later in the novel, Detective Jordan Harrison, of the Clarkstown Police, is investigating and in contact with both women.

The Favor has been compared to a feminist retake on Strangers on a Train, so this might be something to keep in mind when choosing to read it. It does provide a portrait of domestic abuse as seen through the lives of two similar women although the comparison could be stretched to encompass more women in different situations. The voices of Leah and McKenna are shared in alternating chapters so the readers will know their thoughts, struggles, and the truth about what has been going on in their marriages. For those who love procedurals, there are elements of one in the narrative as Detective Harrison conducts his investigations.

Once it starts, The Favor never lets up. It is a totally engrossing compelling novel that should hold your attention throughout. There is a plethora of helpful information regarding domestic abuse after the narrative ends in the notes/ acknowledgements. Murphy also makes the point that a woman's success and education doesn't protect her from domestic violence. This is a debut novel, which is an accomplishment in itself.

Disclosure: My review copy was courtesy of Macmillian Publishers.