The Favor by Nicci French 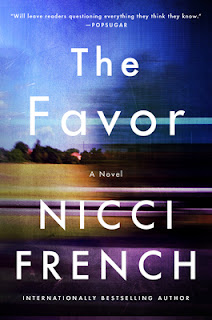 The Favor by Nicci French is a highly recommended psychological drama.

Jude has reached her life goal to be a doctor. She has found love, is planning her wedding and is happy and satisfied with her life. This all makes it a completely unexpected and shocking surprise when her first love, her boyfriend from 11 years ago, suddenly shows up at her work. She hasn't seen him since the car crash they were in as teens. Liam wants a favor from Jude. It's an odd favor. He wants her to drive to a country cottage in his car and then pick him up at the train station later that night. She's not supposed to tell anyone what she's doing and he'll explain it all when he arrives. Jude does as he asks, including lying to her fiance about where she is, but Liam never shows up on the train.

Back at the cottage, Jude is uneasy, especially when she hears a noise and realizes that it is Liam's phone, in his bag which she brought to the cottage for him. Someone is trying to call him and after this the police call his number. Jude learns that Liam has been found dead. Her favor makes her part of the murder investigation and could result in the loss of everything she has.

It is a huge leap of logic that Jude would do this odd, weird favor for someone she hasn't seen in 11 years. This preposterous plot point will hang over the story until, finally, her reason for doing it is explained later in the narrative. Now, many readers may has guessed something like her secret was the case, but Liam also making her along with his brother an executor of his will is equally odd. The house of unusual people Liam was living with, including his girlfriend and son, are also offbeat. Jude quickly becomes entangled into secrets and lies swirling around Liam's social circle.

Jude is a fully realized, engaging character and easy to connect with even when you are questioning her choices. As she becomes involved in Liam's life after his death, a picture of his life and character also emerges. Once she begins looking into Liam's life, she begins to realize that she is perhaps the only one who

The writing is excellent in this psychological drama and held my attention even while I was doubting almost all of the choices Jude was making over everything. Author Nicci French (Nicci Gerrard and Sean French) are well known for their tension filled psychological thrillers and dramas that are filled with misdirection and twists. The Favor compares favorably to their other collaborative novels and is an enjoyable, engrossing page-turner.

Disclosure: My review copy was courtesy of William Morrow & Company.