The Girl They All Forgot 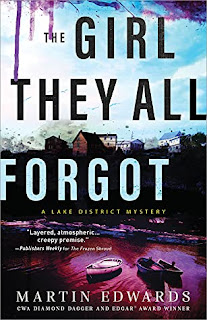 The Girl They All Forgot by Martin Edwards is a highly recommended procedural and whodunit as well as the eight book in the Lake District Series.

What happened to Ramona Smith? The man who was accused of her murder committed suicide. His son also did so on the same day twenty years late. Now DCI Hannah Scarlet, and her Cold Cases Division have reopened the investigation of Ramona Smith's death. Her body was never found, but Det. Insp. Ben Kind, father of Heather's colleague and lover Daniel, is sure she was murdered. In a small close knit community though, everyone has their own opinion. The race is on as Hannah and her team collect clues and leads on the cold case as the body count rises.

This is a well-written atmospheric whodunit that moves at a relaxed pace until the end. Since I haven't read any of the other books in this series, I did feel a bit out of sorts reading the novel at the beginning. I kept up with what was happening, but still felt for most of the beginning that I was a step behind or off to the side of the action. Once things clicked the reading was smooth and interesting but I can't help but think I should have started at the beginning of the series due to the strong sense of location in the setting.

There are a lot of characters and viewpoints presented in the complex narrative, especially with two narrative threads to follow in pursuit of the answers, but when you continue reading and focus on the plot they all sort themselves out eventually. This is set in a small community, so there are many interrelated rumors and theories swirling around in the populace and all of these must be investigated. Those who like complex mysteries will appreciate The Girl They All Forgot, but may want to start the series from the beginning.

Disclosure: My review copy was courtesy of Poison Pen Press.
Posted by Lori L at 1:29 AM