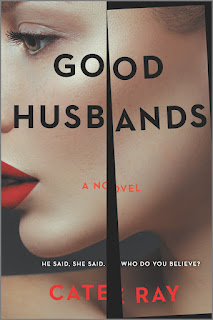 Good Husbands by Cate Ray is a recommended domestic drama that focuses on a sexual assault.

Jessica (Jess), Stephanie and Priyanka (Pree) all receive the same letter from a young woman named Holly who claims that her mother was sexually assaulted by their husbands 20 years ago and she is the child of one of the men. Her mother died years before. Holly will be dead by the time they receive the letter, but she has left proof of her claim in a storage locker for them. Each woman reacts differently to the letter, but Jess is the one who contacts the other two and tries to get them to work together to uncover the facts and decide how to proceed.

The narrative alternates between the point-of-view of Jess, Stephanie, and Pree. We are introduced to them, their husbands, children, and jobs and are privy to their thoughts. They are all very different from each other and each woman approaches the accusations differently. The story of the assault is told through diary entries that are revealed chronologically in each woman's point-of-view. The women are all fully realized characters with a backstory and they all experience change and growth in the novel.

There is no question that Good Husbands confronts a serious societal issue that has been an issue for years. There are discussions of how assault allegations can be viewed from different angles. However, contacting the other women seemed odd. it was surprising to me that Jess and Pree didn't just show the letter to their husbands and confront them immediately. Stephanie had reasons not to incite anger in her husband. Of course, that would change the plot considerably, but it seemed odd that this didn't happen while I was reading.

The whole novel hinges on these three women all not trusting their husbands and working together to discover what happened 20 years ago. The plot is rather slow moving, however, and the writing is lacking at times. However, the female characters are strong, intelligent, and determined women and there are some big surprises at the denouement. 3.5 rounded down.

Disclosure: My review copy was courtesy of Park Row Books.