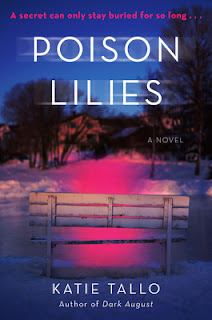 Augusta "Gus" Monet and her dog Levi have moved to The Ambassador Court, an art-deco apartment building with cheap rent. When she finds a cat, Gish, and looks for the owner, Gus makes friends with, her elderly upstairs neighbor, blind, reclusive Poppy Honeywell. Soon the two are sharing dinner together every night and Gus learns that Poppy is a descendant of the Mutchmores, one of the city's founding families. When a body is found in the pond at a neighborhood park, Poppy says she knows who it was, a lost lover. Gus is drawn to the story and begins investigating, a dangerous decision.

This is a direct sequel to Dark August, so it helps to have read the first book before this outing of Gus. You can read this as a stand alone novel, but I think it helps to have read the first novel. The novel is broke up into four segments: first trimester, second trimester, third trimester and birth. Obviously, Gus is pregnant in Poison Lilies and will give birth. We know from the opening that she is locked in a sub basement with no way out and about to give birth.

Gus is a well developed character as an amateur PI, so her skills and interests seamlessly continue in this second novel. She can be sassy and funny as well as serious and doggedly determined. Poppy hires Gus to uncover the truth in her investigation of events from Poppy's past and the Mutchmore family. She is assisted by a journalist she meets, Howard, who is an interesting character and a nice assistant for her. The investigation is full of suspense and secrets that some want to keep buried in the past. You'll have to suspend disbelief, but this is another entertaining investigation by Gus Monet.

Disclosure: My review copy was courtesy of HarperCollins via NetGalley
Posted by Lori L at 11:25 AM