On a Quiet Street 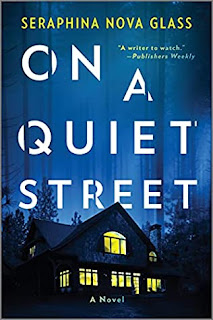 On a Quiet Street by Seraphina Nova Glass is a highly recommended novel of domestic psychological suspense. Brighton Hills is an exclusive community on the Oregon coast but underneath the surface it is a community full of grief, secrets, anger, lies, abuse, cheating and deceit.

Paige and Grant lost their adult son Caleb to a hit and run driver last year. The grief has hit them both hard, but Paige seems to need to grieve alone and lashes out in anger. Her husband has moved into the apartment above their restaurant although he still loves and supports her. Paige is always looking for the driver who hit her son in their gated community because she is sure it was one of her neighbors.

Cora and Finn have a teenage daughter, Mia. Cora is outgoing, positive and helps with all sorts of community events, although she is critical and hard on herself. This doesn't help with the major problem in her life, which is the fact that Finn is a serial cheater but Cora just can't seem to collect the evidence to prove it and when questioned Finn dismisses her concerns. Cora turns to Paige to do the sleuthing and obtain the proof while catching him in the act. The couple has a prenup and proof of Finn's cheating will break it.

Georgia is much younger and has a baby, Avery. Her husband, Lucas, a judge, has spread the rumor that she has agoraphobia. Cora has been diligent to make advances of friendship toward the young woman in hopes that support from a friendly neighbor will help, but it seems that something more is going on in Georgia's life and Cora is keeping an eye on her. Georgia is very afraid of something that traumatized her, but what happened to this previously vibrant outgoing young woman?

Chapters alternate between the point-of-view of Paige, Cora, and Georgia, who all are portrayed as individuals with their own unique voices. Paige is a super sleuth, but also an angry woman. Credit also needs to go to Cora who is also very observant. The characters are developed and their separate personalities allow you to easily distinguished between them.

Stick with this one through the beginning chapters which seem to move a bit slowly and appear to be somewhat meandering and vaguely reminiscent of other similar novels with a plot based on suspicious neighbors. Action will pick up, your interest level will rise, and the novel gets much more interesting before setting off at a break-neck speed to a twisty ending. As I continued reading, my rating improved, especially when the pacing picked up, secrets were uncovered, and the action really started.

Disclosure: My review copy was courtesy of Graydon House Books.