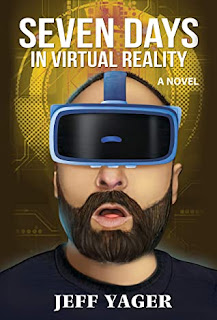 Louis Parker is not winning at life. The divorced father of two teenagers is trying to drive and work at a restaurant and neither job is working out. When out one night drinking he runs into Jack, one of his brother's old friends. Jack gives him his card and says to call if he needs a job. Louis does and finds out that he can make a whole lot of money just for testing out a virtual reality game. For the first game he relives specific chosen days from his life. Then he's offered the chance to test the second version in which the consequences of participating in this can be much greater.

The premise of the story and the consequences of playing the VR game is what really is entertaining and interesting in Seven Days in Virtual Reality. It is difficult to relate to Louis as he isn't a particularly appealing, likable, or fully realized character, but the fast pace and the VR game is really the whole point to the novel. The money entices him, but quite frankly any paying job would have. The large paychecks just had him spending money foolishly. (And there is way too much smoking, heavy drinking, and foolish behavior.)

So, read this novel for the idea of a VR game that actually allows you to go back and relive days of your life and maybe even change things. It could be an impetus for some very interesting conversations. The writing is uncomplicated and don't expect great character development. Recommended just for the idea of reliving days of your life or maybe change events through a VR game.

Disclosure: My review copy was courtesy of Hannacroix Creek Books .
Posted by Lori L at 4:40 PM