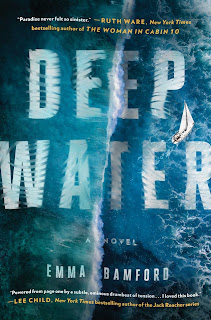 Deep Water by Emma Bamford is a recommended tale of a newlyweds trip gone disastrously awry.

When a yacht is sending out a distress signal in the Indian Ocean, Royal Malaysian Navy Captain Danial Tengku orders his crew to aid the boat. On board is a British couple, Virginie Durand and her gravely injured husband Jake Selkirk. As Jake is rushed to receive medical help, Virginie tells their story to Captain Tengku and confesses that what happened was all her fault and she killed them. After this foreshadowing, the novel jumps back in time when newlyweds Virginie and Jake bought their yacht and were planning to travel to Thailand. Then they heard about Amarante, a tiny, remote island with unspoiled beaches, and decide to change their plans.

The couple arrives on Amarante, and finds there are already visitors there. Pete and Stella are a Canadian couple, and Roly is from Australia. They’re soon joined by the wealthy, enigmatic Vitor and his girlfriend, Teresa. At first things go well, but then Virginie and Jake have engine problems, and tensions begin to rise between couples.

The synopsis written for this book does not do it justice and is misleading. There is no dark spell of the island with creeping evil. There are human failings and frailties. If you enter the novel with the perspective that it is a trip that has taken a terrible turn it will help your appreciation of the novel and result in less disappointments.

Virginie is telling us what happened on the island that lead to the distress signal. Captain Danial Tengku is listening to Virginie's recount of what happened before she tells the full story and then afterward, once they are found. His own internal monologue and reactions are added to the opening and concluding chapters. Her account of their time on the island moves too slowly for any real tension or suspense to build as it mostly feels like normal disagreements and tension that could be found among any group of people.

The writing is very good, enough that I kept reading, experiencing vicariously life on a remote tropical island. It is not quite good enough to make this slow paced novel a thriller. By the time action/suspense does pick up, the novel is basically over. This will appeal to fans of novels that feature remote islands where the people provide the danger, or the guilt.