What They Don't Know 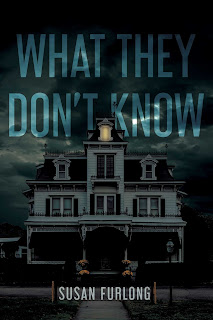 What They Don't Know by Susan Furlong is a highly recommended domestic psychological thriller.

Mona and Ben Ellison live in a Victorian home in suburban Belington where their neighbors are all close friends of Mona and everyone keeps an eye on everyone else, but now they are selling and moving to a condo in the city closer to Ben's clinic. Ben, a child psychologist, has a flourishing career, however Mona and Ben are having a trouble in their marriage. Their son Gus has fallen in with the wrong crowd and left home, breaking Mona's heart. Mona is obsessed with her vast collection of dolls and is constantly looking at social media to locate Gus.

To make matters more interesting a young woman who was a friend of Gus has been murdered in the area. The police are wanting to question Mona and Ben, but Ben is out of town. Mona seems overwhelmed and confused. Ben has been medicating her and she is trying to follow any clues on social media that lead to Gus's whereabouts while hanging out with her dolls.

Readers won't know who to trust or believe in this creepy domestic psychological thriller and the police have their work cut out for them. Suspects are plentiful and no one can be believed or trusted. Do you trust the woman who talks to her dolls and might be crazy? Or do you trust the neighbors who seem to be watching everyone and then jumping on the phone or stopping by the house? Or do you trust the husband who lies about where he is and seems too smooth to be real?

The plot moving along at a fast pace while including plenty of twists and turns along the way in this well-written thriller. This is a good choice for escapism, as long as you can handle a woman who talks to her dolls, which is never a good sign in most cases.

Disclosure: My review copy was courtesy of Simon & Schuster.
Posted by Lori L at 11:42 AM