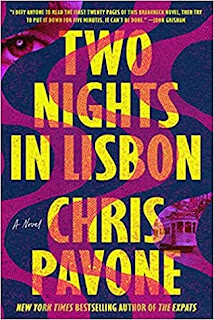 Ariel Pryce is accompanying her husband John Wright on a business trip to Lisbon, so when she wakes up in their hotel room and John is gone, she assumes he is having coffee and will be meeting her for breakfast. Soon it becomes clear that John is gone. He left no note and is not answering his phone. Ariel talks to the hotel staff and then goes to the police, followed by the American Embassy. She is sure something has happened to John. The CIA gets involved; John was in the CIA years ago.

Then Ariel receives a ransom demand for 3 million euros to be delivered within 48 hours for John’s safe release by unknown captors, which just increases the questions investigators have. Why did both Ariel and John change their names years ago? The CIA knows that John changed his name. Why would anyone kidnap John? Ariel is not wealthy, why would someone assume she could come up with a large ransom? Ariel is desperate and knows one man who could come up with the money, but it requires contact with someone from her past that she doesn't want contact with ever again.

There is no question that this is suspenseful, tense, well-written layered thriller that will hold your attention throughout. I was engrossed beginning to end. This is a complicated plot that is structured to allow tension to build and rise incrementally as the timeline clicks down. Between the officials doubting and questioning her motives to the reporter who was given a tip to investigate, readers will also be questioning along with officials, "Why John?" There are clues that will open readers up to speculating the answer to the question, but Pavone has plenty of twists to keep you guessing. Sympathies will be with Ariel as there appears to be no obvious course of action for her to take beyond what she chooses to do.

The narrative alternates between events in the present and flashbacks to Ariels's past. She is a well developed character, but the only one. Two Nights in Lisbon does require you to accept that events have happened in Ariel's past which have shaped and molded her into the person she is today. Occasionally I wanted her to have experienced healing from them and move on rather than dwell on the events, but I also have a lot of sympathy, compassion and understanding for her.

The final denouement was suspected, but still a surprise leading up to an unanticipated final disclosure. Two Nights in Lisbon is a lengthy novel, but it is also quite entertaining

Disclosure: My review copy was courtesy of Macmillian.
Posted by Lori L at 11:19 AM