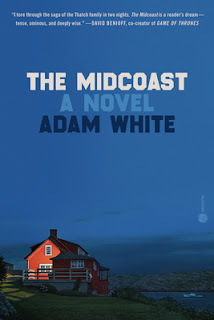 The Midcoast by Adam White is a highly recommended debut novel examining a family striving to achieve wealth and status in the town of Damariscotta, Maine

Ed and Steph Thatch have risen from a modest beginning to a place of wealth and prominence in Damariscotta. Andrew, a high school English teacher and coach, has recently moved his family back to Maine due to the lower cost of living there. He knew Ed Thatch back when they were both teenagers and Andrew worked summers for Ed as a dockhand at the Lobster Pound, owned by Ed’s father. As the narrative opens, Andrew and his family are invited to a lavish reception for the Amherst College lacrosse team at the Thatch's estate. It is here that Andrew sees a disturbing photo that will be the impetus for the rest of the novel.

Questions arise when the police show up at the reception and from this point on Andrew starts looking back at their lives and what led to the current events. Back when Andrew knew Ed, he never would have predicted Ed would become the owner of several lobster boats and a major donor for town projects and Steph would become the town manager. A common theme running through their marriage is the known fact that Steph wants nice things and Ed wants her to have the life she deserves. This is the motive for everything Ed does.

There is a Gatsbyesque element to The Midcoast as it examines the quest for wealth and the deception involved as Ed does everything he can to make Steph happy and Andrew looks at Ed's life from the sideline. The narrative mainly follows Andrew interviewing people after the day of the party for a book about Ed's actions. The timeline is not chronological. The narrative moves around in time culminating with a return to the opening scene as the last scene in the novel. The complex plot slowly builds as Andrew discovers more of Ed's actions and activities. Sometimes the narrative is in first person while other times it is revealing the actions and thoughts of other characters. Suspense builds over the mystery concerning a photo Andrew sees while attending the reception.

The Midcoast is certainly an excellent debut novel that tackles an impressive amount of details and a myriad of issues in a complex plot. Not all the characters are as fully realized as I would hope as some important personal motivating factors seem absent, but this could be a deliberate choice as certain character's backstories are told through their own voices. It is not a quick paced thriller, but once you start reading you will want to know what happened, what the photo means, and how Ed is involved.

Disclosure: My review copy was courtesy of Random House via NetGalley.
Posted by Lori L at 8:01 PM