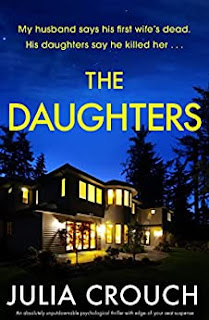 The Daughters by Julia Crouch is a highly recommended thriller featuring a highly dysfunctional family.

First, lets look at the basics of this blended family. Carys has been married to Bill for 12 years, is 25 years younger than him, and the two have a daughter, Binnie. Bill's first wife Alice died by suicide. Bill and Alice had two daughters, Sara and Lucy. Lucy was only 6 when her mother died so Carys has been a step-mother to her while Sara, 5 years younger than Carys, has been off living in Australia during their marriage.

Now Sara is coming home for a long visit. She has evidence that her mother's body was never found and the casket was empty at her funeral. She blames Carys for controlling everyone since she and Bill married shortly after Alice's death and she's going to confront Carys. She also knows she needs to come back to help Lucy.

At the same time, Lucy has been suffering from various struggles with her mental and emotional health. Carys has tried to help her, so when she meets a hypnotherapist who is sure he can get to the root of Lucy's trauma, Carys takes Lucy to him without telling Bill. Lucy's sessions bring out all kinds of hidden secrets and thoughts from her childhood. She is sure she saw someone killed... and maybe more than one person. And she thinks she knows who the killer is.

There is a whole lot going on in the plot, so you have to pay attention while following all the various twists, turns, and new revelations. None of the characters are particularly likable and all of them have some aspersions cast their direction. You won't know who to believe or if anyone can be trusted, which is what makes The Daughters so entertaining. You have to set some disbelief aside as you sit back, enjoy reading, follow the clues left in the narrative, and see if you figured it all out by the end.

Disclosure: My review copy was courtesy of Bookouture via NetGalley.