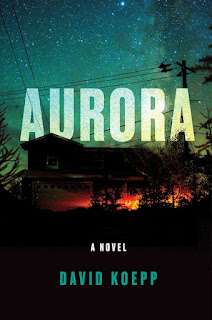 Aurora by David Koepp is a very highly recommended scientific thriller. This one is going to be made into a movie.

A coronal mass ejection or solar storm, on the sun sends out a massive cloud of solar plasma aimed at the Earth resulting in a Carrington Event. Everyone is on notice that in a short amount of time the whole electric power grid on the Earth will go down. A Carrington event of this size would cause auroras to be seen almost world wide. In Aurora, Illinois, Aubrey Wheeler is caring for her ex's teenage son and trying to stay away from Rusty, her ex, due to his semi-criminal connections. Her brother, Thom, is a billionaire who has been planning for years just for this end of civilization scenario.

We are due for another massive solar storm that perhaps could reach this size, which makes Aurora is a compelling and intriguing scientific thriller. Koepp takes the basic science and writes an irresistible narrative which places the characters in the situation. Personally, I love science fiction novels that are based on facts and Aurora covers all the bases as we have the event and we follow several characters through it. Even better the movie rights have already been sold; this novel was written to be made into a movie.

While you will like some characters and dislike others, all of them are fully realized and will experience change and growth for the better or the worse in the plot. I appreciate how Koepp has reduced his action down to the local response to it, especially in Aubrey's cul-de-sac, because an event of this nature would very much play out locally for most people. Suddenly the big picture wouldn't matter as much as how you and your neighbors are able to cope and, hopefully, work together.

When you are in the hands of an experienced writer, you know it. Koepp does an exceptional job setting up the action with all the pertinent information readers will need and then allowing the events to occur. The tension builds gradually as the action unfolds. The narrative switches between characters and locations while developing the characters and allowing the plot to take hold. It becomes clear that events will lead to some kind of major confrontation, but Koepp includes some humorous and heartwarming scenes along the way. This is escapism at it's finest.