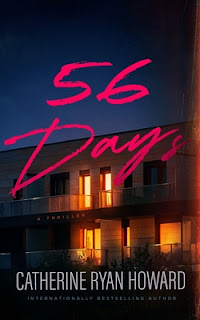 56 Days by Catherine Ryan Howard is a very highly recommended murder mystery set in Ireland during the 2020 lockdown.

What would you do if you started a new relationship and the attraction was mutual. You both think this new relationship has potential - and then the whole world shuts down. Should you shelter together during the lock down? This is the story of Ciara and Oliver, who met in a grocery store fifty-six days ago. Their first date is the week COVID-19 reaches Irish shores. Thirty-five days later they learn the country is shutting down and they decide to live together in Oliver's larger apartment. Today a decomposing body has been found in Oliver's apartment. Now the police need to uncover what happened.

The writing and the pacing are excellent. I was totally engrossed in this story start to finish. Enjoying a lock down story this much surprised me, but it's the layers and depth to the narrative that set this apart as an outstanding novel. Both Oliver and Ciara have secrets and things they are hiding from each other. They are attracted to each other, but are also questioning everything the other person is doing or thinking. Adding to the tension is the fact that we know the police Detectives Lee Riordan and Karl Connolly are investigating a body found in an apartment.

The narrative jumps between the points-of -view of Ciara, Oliver, and Lee and in doing so it also jumps between time periods. The revelations slowly build up a complete picture of everything that happened. The tension builds and the questions escalate while the story is mesmerizing and admirable. Ciara and Oliver are both realistic, interesting characters and you will like them. They like each other and have made this surprising decision, and it makes sense. Certainly their relationship will flourish without outside tensions. But we know something is going to happen once the detectives begin investigating a body found in an apartment. What could have gone wrong?

Disclosure: My review copy was courtesy of Blackstone Publishing.