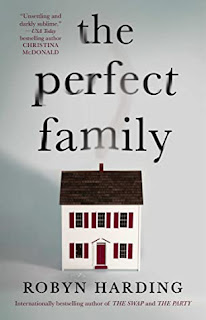 The Perfect Family by Robyn Harding is a highly recommended domestic thriller.

Thomas and Viv Adler by all outward appearances are the perfect family. They are parents to two children Eli, 20, and Tarryn, 17. They are both successful and live in a beautiful home. So why is someone targeting them? They have woken up to find that eggs and rotten vegetables were hurled at their home. They have found excrement on the front door handle, woke up to slashed tires, and have had a smoke bomb tossed into their front yard. The police believe it is all from bored teens playing pranks on them, but each of the Adler's have reasons to believe that it is something more. Everyone in the Adler family has secrets that they believe could be behind the pranks and the fear is that the assaults will escalate.

After the opening when an unnamed individual is planning to set fire to the side of the Adler's house, the narrative alternates between the point-of-view of each character. All of their secrets and worries are revealed in their chapters. And these people have some major secrets! They are all terrified that their secrets will be revealed and people will know that they are not the perfect family. Basically: Viv is worried that Thomas is having an affair, and, oh, by the way she's an interior designer who has a little problem with kleptomania; Thomas is being blackmailed after a wild night at a bachelor party; Eli is back home after his sophomore year of college and he is dropping out after an incident he is keeping secret; Tarryn is secretly camming at night when she puts on lingerie and a wig and is being paid to talk to strangers online.

All the characters are fully realized and developed. They are all flawed and concerned about appearances in their own way. It becomes clear that each of them has an awful secret that may be responsible for the assault on their home. This means readers have a whole lot of people to consider when trying to figure out who is attacking the Adlers. And the secrets and suspects seem to multiply, as does the paranoia of each character, as the novel progresses. At the same time not all the actions of the characters are completely believable

This is a well written domestic thriller that is addictively intriguing and compelling. The pages will fly by as you want to find out what each character is thinking about in their narratives. It is fascinating to see a family so worried about outward appearances when a little soul searching and honesty would go a long way to lessening some of their anxiety. Although some secrets are shared, the plot has enough twists that there are no real answers until the final chapters where we get a lot of answers up to the surprising final denouement. There are a plethora of pop culture mentions that I found distracting, although they do establish the pretentious nature of the family.

Disclosure: My review copy was courtesy of Simon & Schuster/Gallery Books.