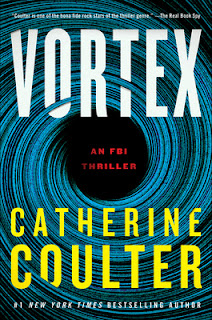 Vortex by Catherine Coulter is a highly recommended thriller and the 25th book in the FBI Series.

Mia Briscoe's best friend, Serena, disappeared seven years ago when the two attended a frat party where a fire broke out. Nothing was ever discovered about her disappearance. Now an investigative journalist covering the political scene Mia still wonders what happened to her friend. When a friend discovers some old photos on a phone that were taken at the party she gives them to Mia to see if they could provide any clues about what happened that night. She quickly identifies the suspects in Serena's disappearance and with the help of FBI agents Tommy Maitland (Serena's boyfriend) and Lacey Sherlock much more is uncovered.

At the same time there is another case going on. FBI agent husband, Dillon Savich, Lacey's husband, is looking into an attack on a CIA agent Olivia Hildebrandt. She killed one of the two men who attacked her. The attack is likely related to her last mission and almost certainly linked to the disappearance of CIA agent Mike Kingman, who is in hiding with a flash drive he got from an operative in Iran. Savich has to moves Olivia to a safe house, protect her CIA interference, and uncover the conspiracy going on.

The dual plots work, but it can be confusing remembering and keeping every character straight in the beginning for those new to the series or from someone who has not read every book in the series. As the narrative switches between story lines in each chapter, readers can figure out who is trustworthy and work on keeping track of everyone until they become better acquainted with all the characters. After a powerful opening followed by a slower start introducing the cases, the novel quickly becomes a fast paced read and both story lines have plenty of twists to keep your attention. Mia does figure out in too-large-a-coincidence who are the suspects in Serena's disappearance in the first third of the novel.

Fans of the series will already know the agents, although character development will feel light for a new comer to the series. You can appreciate the novel without reading previous books in the series as long as you realize you might not understand the complete history of everyone right away. The slow start serves to provide much of the needed background in order to better appreciate the plot.