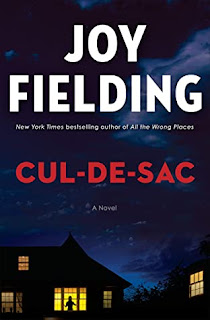 Cul-De-Sac by Joy Fielding is a recommended psychological thriller.

Right at the start we know someone living in one of the five houses on the quiet cul-de-sac in Palm Beach Gardens, Florida, will be dead, shot by another resident. What resident from one of the five homes is going to be responsible? Maggie and her husband are currently separated and have two children. Maggie is scared and paranoid after a frightening incident which propelled the family to move from LA to Florida. Julia is an 84 year-old widow whose grandson is staying with her while her son is trying to talk her into moving to a retirement community. Sean is unemployed, drinking heavily, and lying about going to job interviews while Olivia, his wife, is doing well in her return to the job market. Nick is an oncologist and Dani, his wife, is a dentist. They have two sons. Nick is controlling while Dani seems to be giving the other neighbors the cold shoulder. Aiden and Heidi are newlyweds. Aiden suffers from PTSD and his mother, Lisa, is the controlling, shrewish mother-in-law from the abyss. They all have secrets and fears. And everyone owns a gun.

This is akin to a closed room murder mystery, where we are looking at a small group of people and all their problems, while knowing one of them is going to murder another one. The characters are all caricatures of a kind of person. It is successful in this closed-room plot element. You do have to set disbelief aside several times and approach the novel as an often over-the-top melodrama.

They are all dislikeable characters, most of them extremely so, with the exception of Julia who is a rational, sensible woman. Maggie is the one character who experiences growth. There are going to be several characters whose actions and problems may anger, disgust, and exasperate you. There is abusive behavior and an assault which actually sickened me and I almost set the novel aside at this point. I did go on to finish it and the denouement is satisfying. Fielding makes it clear that we know everyone in the novel has a gun. She apparently wants to equates this to danger and carelessness, which is a nonsensical and objectionable presumption to apply in such a broad general way, especially considering the actual events in the novel and the reason for the lethal force, the use of which most readers will applaud. (And in light of the fact that we all have knives, which can also be weapons.)

Disclosure: My review copy was courtesy of Penguin Random House.
Posted by Lori L at 4:06 PM