In My Dreams I Hold a Knife 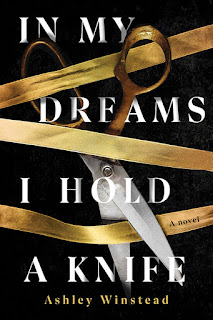 In My Dreams I Hold a Knife by Ashley Winstead is a very highly recommended murder mystery. This is an unputdownable, binge-worthy, entertaining, exceptional debut novel.

It has been ten years since Jessica (Jess) Miller graduated from Duquette University. Jessica is planning to attend the reunion and display how she is now successful, beautiful, and confident in life. This will be in contrast to the murky end of college when one of her friends was murdered. They were close friends who ruled the campus and were known as the East House Seven: Heather, Caro, Mint, Jack, Frankie, Coop, and Jess. Heather was murdered at the end of their senior year and Jack was the main suspect, but wasn't charged. The group left under a cloud of suspicion. Now five of them are coming back, to the reunion. Jack, still friends with Jess, is not attending. Heather's younger brother, Eric, now works in alumni office and plans to use the reunion as an opportunity to find her killer. He knows it is one of the five people from the East House Seven attending the reunion.

The narrative alternates between the two timelines, one set in the present at the reunion and the other in the past during their college years. The characters are fully realized. Jess is the main narrator of the story at the reunion with flashbacks mostly from her point-of-view until much later in the novel. Jess is a flawed character - self-centered, dislikeable, and driven but with low self-esteem. Her flaws and those that eventually come out about the other characters make the plot even more interesting.

This is an excellent novel! At the beginning of In My Dreams I Hold a Knife, I thought, "oh no, not another college golden days novel," but as I continued reading, I was very pleasantly surprised. The alternating  timelines works so well in this novel and Winstead uses the plot device perfectly to provide background information while increasing the tension. And there are revelations, twists, duplicity, secrets, hypocrisy, and surprises abounding. It is a remarkable murder mystery melodrama. Once the plot gets rolling and secrets start coming out it really is impossible to stop reading.

Disclosure: My review copy was courtesy of Sourcebooks.