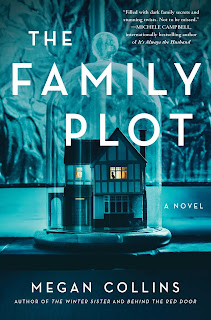 The Family Plot by Megan Collins is a highly recommended atmospheric murder mystery with Gothic overtones.

Dahlia Lighthouse's father, Daniel, has passed away and at age 26 she is returning home to Blackburn Island after being gone for 8 years. She grew up in what locals called the "Murder Mansion." This moniker was given to her home and family because of her true-crime obsessed parents and the way she and her three siblings were raised. Dahlia and Andy, her twin brother, were much younger than her older brother Charlie, and her sister, Tate. Their mother taught them at home but she based her curriculum off of her obsession with true crime stories. As her twin brother, Andy, often said their family was unnatural and the way they were raised wasn't right. Andy disappeared at age 16, presumed to have run away, but soon after Dahlia returns home a shocking discovery is made: Andy's body, his skull split open with an ax, is found buried in their father’s plot.

Dahlia is determined to find the killer and bring him to justice. She is sure Andy's death had something to do with the Blackburn killer, a serial killer who murdered seven women over two decades on the island but was never caught. As Dahlia tries to uncover who killed Andy, the rest of the eccentric family responds to the news by keeping busy with disconcerting activities. Her mother, who does not cook, endlessly tries to bake cookies. Charlie plans to open up the mansion for a limited time as a murder museum. Tate, who makes popular dioramas portraying crime scenes, begins to make one for Andy.

The writing is good, and, although it caught my attention at the beginning, once the novel took off I didn't personally connect with the whole true crime angle. Dahlia is the narrator for the entire novel. The story drags a bit in the middle as new information that may or may not mean anything and potential suspects are introduced. Character development is a bit lacking, perhaps in an attempt to create mystery, but it wasn't entirely successful. The novel does pick up the pace at the end and all the mysteries are resolved.

Since Andy's body is found right away it sets up the search for the killer amid an odd family who have an encyclopedic knowledge of all sorts of other true crime victims. While at first this is startling and weird, it actually doesn't add much to the actual advancement of the plot. Additionally I had to set disbelief aside as I couldn't help but wonder why no one sent some authorities to look into the home life of the children living in the "murder mansion." While I fully believe in homeschooling, all the revelations by the end of the book would have warranted some concern, especially if you have a police officer basically stalking them 24/7 who certainly would have saw or heard something - like children required to write murder reports for their schooling. 3.5 rounded up for the unique hook.