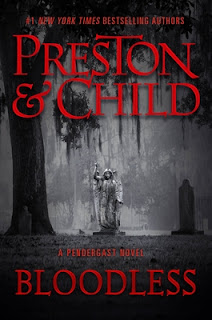 Bloodless by Douglas Preston and Lincoln Child is a very highly recommended investigative thriller and the 20th book in the Pendergast series.

Bloodless opens with one of the FBI's most famous unsolved cases occurred on November 24, 1971, when D. B. Cooper hijacked Flight 305 from Portland to Seattle. Cooper, who said he had a bomb, collected a ransom of $200,000, and parachuted off the plane. He was never found.

Fifty years later FBI agents Aloysius X.L. Pendergast and Armstrong Coldmoon are sent to Savannah, Georgia, to investigate two bodies that have been found completely drained of blood. Accompanying them is Constance Greene. Behind their case assignment is a U.S. Senator who wants the case quickly taken care of before the bad press jeopardizes his reelection. At the same time, a crew arrives in town to film a documentary on haunted Savannah for Netflix and want to tie the bloodless bodies to rumors of the Savannah Vampire. Pendergast always has a way to find the responsible perpetrator and is always unconventional in how he accomplishes this task.

This entertaining installment in the series can be easily read as a stand-alone since it doesn't tie into any previous cases. And it is a wild weird ride to investigate and solve the case. The great thing is that you can't guess what the final denouement is going to be as Preston and Child always have a shocking twisty solution in their novels and this time it is even more unpredictable. Solving the D.B. Cooper case along side the case of the bloodless bodies is a surprising connection and the ties to the current case is wonderfully unexpected. When you reach the conclusion it is going to be a breathless, action-packed, shocking surprise. You'll never anticipate the directions and places this one will go.

At this point fans know the characters and won't really need much information beyond that which is provided. Those new to the series just need to now that Pendergast and Constance are both enigmas as a characters anyway. Their inscrutability is a constant in most of the novels so any time any unexpected insight is revealed, it is a major development. Sit back and enjoy the investigation, including Coldmoon's preferred coffee.

Disclosure: My review copy was courtesy of Grand Central Publishing.
Posted by Lori L at 1:01 PM