A Fire in the Night

A Fire in the Night by Christopher Swann
9/7/21; 288 pages
Crooked Lane Books 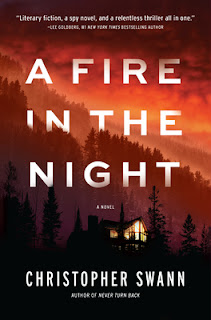 A Fire in the Night by Christopher Swann is a highly recommended thriller.

Since his wife's death a year earlier, Nick Anthony, a retired professor of medieval history, has lived a quiet secluded life in the North Carolina mountains. When county Deputy Joshua Sams shows up at his house to inform him that the bodies of his estranged brother, Jay, and sister-in-law have been found after their Tampa, Florida home was set on fire, Nick learns that it appears to have been a double homicide and that their daughter, Annalise, a niece he didn't know existed, is missing. When an intruder later turns up on his porch, obviously ill and feverish, it is Annalise. After he brings her back to health, she has information, a map and thumb drive, that her dad wanted her to get to Nick.

At the same time Cole and his team of private military contractors have realized that Annalise was not killed in the house fire and has escaped with the information they are being paid to recover from Jay. Now the lethal team must find Annalise and recover the information. They will let nothing stand in their way. As they try to track Annalise's location, what they don't know is that Nick exists, let alone that he has some skills and abilities in his past beyond his academic career.

Perfect reading for escapism, A Fire in the Night is a fast paced literary thriller that is tightly plotted without a lot of extraneous details or multiple plot threads, which works well in this story. The writing is excellent, which I expected after Swann's last novel, Never Turn Back. There might be a little suspension of disbelief over some of the skills the characters possess, but not enough to detract from the narrative. The descriptive writing perfectly sets up the locations and scenes. The characters believably inhabit the world created here. The threat Nick and Annalise face is real and tension will mount as the men searching for Annalise get closer and closer.

Both Nick and Annalise are fully realized, developed characters who are realistically depicted. They are not perfect people, but you will like both of them, believe in them, and hope they both live to see another day. Annalise is portrayed as a believable teenager under unbelievable stress. Nick is grieving and surprised by Annalise's existence, but manages to do the right thing while thinking about the dialogue he and his wife would have had about the situations. The bad guys are seriously scary and threatening, but also feel like real individuals, which makes them more menacing in many ways.

Disclosure: My review copy was courtesy of Crooked Lane Books.