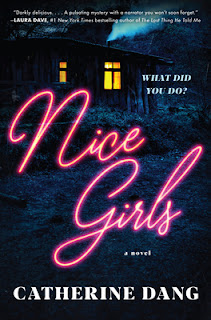 Nice Girls by Catherine Dang is a so-so murder mystery.

Mary left Liberty Lake, Minnesota for Cornell with the moniker of "Ivy League Mary" given to her by the locals. Now she is back at age 22 having been expelled during her senior year from the university for assaulting another student. Mary, who was a quiet chubby girl before she left, is now much thinner but still carrying much of the anger she had when still living there and apparently all through her time at Cornell. When Mary's father brings her home he expects her to get a job and she does, as a cashier at a local grocery store. Right after Mary arrived back in Liberty Lake, a previous friend, Olivia Willand, goes missing and the town is searching for her when Mary discovers that another girl, DeMaria, went missing months earlier and didn't receive the same attention and care by the police.

Perhaps this is more of a mystery for young adult readers because of the simplistic writing and predictable plot. Mary is truly an extremely dislikable character so it was a struggle at time to keep reading the novel. She's immature, cynical, carries grudges, and constantly recalls wrongs done to her in the past. She is only 22, so it is not like she has a life time of being down trodden. I could go with all of this but when she starts working at a grocery store, which, horrors, is beneath her intelligence and capabilities, the whiny protagonist lost me. Then when she calls in sick to start doing her own investigating, I was over it. There are plenty of stereotypes presented and the characters are all more caricatures in Nice Girls. The last third of the novel heads off into an unbelievable direction and the ending takes a whole lot of suspension of disbelief. I finished it, but this one wasn't a winner for me.

Disclosure: My review copy was courtesy of HarperCollins.
Posted by Lori L at 12:41 AM