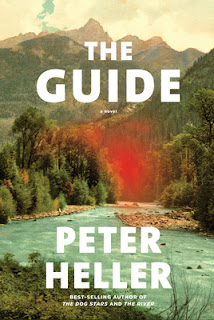 The Guide by Peter Heller is a masterfully written exceptional literary thriller that is very highly recommended. This is one of the best novels of the year.

Jack decides to take a break from working on his father's ranch and accepts a short term seasonal job as a fishing guide at Kingfisher Lodge in Colorado. The lodge is a resort for the privileged where guests pay a high premium to fish along the pristine river nickname "Billionaire's Mile." Jack's hope is that guiding guests in finding the best trout fishing possible will help him recover from traumatic events in his past. Once at the lodge, he learns there are an excess of rules, that the boundaries of where guests are allowed to fish is strict, with one end guarded by a crazy old man with a gun and the other by a pack of guard dogs, and he notices cameras everywhere. Jack is assigned to guide Allison K., a well-known singer, for a week of fishing.

Jack and Allison quickly form a bond while fishing and soon after over their suspicions that things are not as they seem. Many of the guests don't fish, but why would they have a bandage on their hands after a spa day? When Jack is the recipient of a warning shot while they are fishing and a scream is heard in the middle of the night, both Jack and Allison are suspicious that something else is going on at the lodge and at the adjoining property.

The impeccable writing in The Guide is absolutely perfect and sets the scenes, perfectly describing the natural world and bringing it to life. This attention to detail continues in the portrayals of the characters and in the discoveries of what is really going on at the lodge. The tranquil beauty of the natural setting contrasted with the truth of what is going on is a shocking and appalling juxtaposition and creates an increasing sense of danger and repugnance.

The Guide is set in a post-pandemic world and three years the events in The River, in which Jack was one of the main characters. Enough of Jack's backstory is in the narrative that you don't have to read the River first, but I would definitely recommend that you do, as it is also an incredible, riveting novel. Jack and Allison are portrayed as believable, unique individuals and create a good team together. The setting and Colorado river is itself a character. The speculative setting a few years in the future feels realistic, but also depicts a frightening concept.

This is an original, compulsively readable thriller and you will want to know the answer to the mystery at the lodge, but also be frightened about what will happen to Jack and Allison as it becomes increasingly clear that they may be in danger. The action leading up to the ending is riveting and engrossing. The ending is absolutely satisfying and redemptive. The Guide is one of the best novels of the year - don't miss this one!

Disclosure: My review copy was courtesy of Knopf Doubleday.