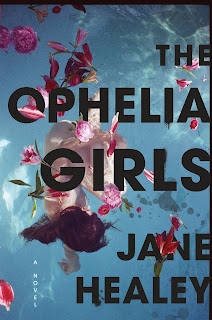 The Ophelia Girls by Jane Healey is a recommended atmospheric novel that examines the inner lives and actions of a mother and daughter as teenagers.

Set during the summer in a large dilapidated country house in Kent, England, The Ophelia Girls follows the inner dialogue and obsessions of mother Ruth Hawkins and her seventeen-year-old daughter Maeve. The novel alternates between two time periods. In 1973, Ruth and her four friends were obsessed with pre-Raphaelite paintings and taking pictures of them recreating the drowning of Ophelia. The end of the summer results in tragedy, which is alluded to early on and not fully disclosed until later in the novel. At the same time, Ruth is struggling twenty-four years later with being a wife and mother to Maeve, a teen and young twins while living in the home she inherited from her father, with whom she was estranged.

Seventeen-year-old Maeve was ill with cancer for years. She is now in remission in 1997 and is supposed to be enjoying her teenage years, but she is unsure of how to proceed after years of fear and constant attention of her parents and medical staff. What she does realize is that she feels attracted to Stuart, a friend of her parents who is staying with them for the summer. Stuart is a well-known professional photographer purposefully acknowledges her attraction and he encourages her by giving Maeve the attention she craves. He begins to ask her to pose for photos.

The point-of-view switches between Ruth and Maeve. These are realistic characters whose personalities and action are those of authentic people. This authenticity means the characters are self-centered, secretive, aloof, inattentive, and unhappy. Maeve feels she is grown-up, but is also experiencing uncertainty. Readers will recognize immediately that her parents should have been more attentive to Maeve and realize that it wasn't hovering to know what she is feeling and doing. Stuart is who cannot be trusted and is simply creepy. It is hard to see his actions as anything but those of a predator and accept that Maeve's parents didn't realize it.

This is a beautifully written, descriptive novel with an ethereal, Gothic quality at times. The plot moves at a steady pace. The descriptions pull you in, as does the foreboding sense of impending doom and uneasiness in both time lines. The actual themes presented in the novel, however, are not necessarily enjoyable. The connection between Ruth and Stuart and then Maeve and Stuart was nefarious and unpleasant, resulting in a disagreeable, odious feeling right at the start which tainted the rest of the novel. If this was Healey's intention, she was successful, but at time it made the prose difficult to read.

Disclosure: My review copy was courtesy of HMH Books.