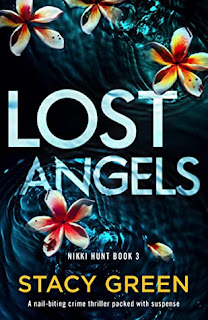 Lost Angels by Stacy Green is a highly recommended procedural and the third book in the Nikki Hunt series.

When a body is found in the Boundary Waters area in Northern Minnesota near Stillwater, FBI Special Agent Nikki Hunt, her partner Liam Wilson, and forensic specialist Courtney Hart are called in to investigate. Other than a few differences, the young woman is positioned and has all the signs indicating she is the fifth victim of a serial killer tagged as Frost. Nikki and her team have been looking for Frost for five years. When they are examining the victim Nikki is shocked to recognize her as a childhood friend she hasn't been in contact with her for years, Annmarie Mason. When the team searches for clues in Annmarie's apartment, they are even more stunned to discover that she has been tracking Frost on her own and may have known she would be a target for the killer.

The good news is that Lost Angels is an exciting procedural that will hold your complete attention while following the action, clues and discoveries. This means that most readers can set my upcoming qualms aside. Now the clues do pile, up as does the sense of an impending malevolent threat that seems increasingly personal and targeting Nikki. Adding to the unease is that Annmarie, although no longer in contact with Nikki, was following the Frost case and evidence closely, and seemed to suspect something nefarious connected to the case and the purpose of the murders. She also clearly thought correctly she was a target. When Nikki later finds a clue in Annmarie's apartment, clearly left by Frost, it shakes her up to the very core.

Now for my misgivings. First, it might help readers new to the series to read the first two books, The Girls in the Snow and One Perfect Grave, before Lost Angels as this third installment in the series really jumps right into things assuming some prior introduction to the characters and previous events. For me, a reader new to the series, most of the characters seemed underdeveloped. It was also quit clear the direction the plot was taking very early on and wondered why Nikki, presented as an intelligent, astute investigator, didn't have a clue. Finally, one must say "Goodness, how many terrible, twisty things can happen in a short period of time to one woman?" And Nikki surely has been through a whole lot before this novel takes place adding to the long list of horrendous events in her life.

Disclosure: My review copy was courtesy of Bookouture via NetGalley.
Posted by Lori L at 2:32 PM