The Family Across the Street

The Family Across the Street by Nicole Trope
8/6/21; 250 pages
Bookouture 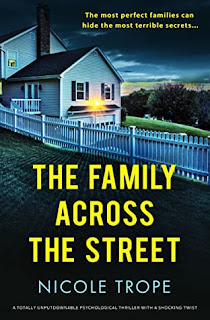 The Family Across the Street by Nicole Trope is a highly recommended domestic thriller set in Sydney, Australia.

Margo is taking care of her baby when she hears what sounds like gun shots. As she looks outside she sees the police and her older neighbor Gladys outside. When Margo steps out to ask what is going on, Gladys tells her that shots have been fired and to go back inside. At this point the novel jumps back in time seven hours earlier in the morning when it appears that things started to go wrong at the Wests' home. Logan, a delivery driver has a package for Katherine West that must be signed for, but she says she can't open the door to sign for it. This strikes Logan as odd, especially when he said he'd wait if she needed to get dressed or anything. Gladys noticed right away that the twins, George and Sophie, were quiet in the morning, rather than the loud and rambunctious five-year-olds they normally are, and she didn't see them leave for school. When she tries to stop by and talk to Katherine, she is told it isn't a good time through the closed door. She later tries to call Katherine several times but the calls are not answered. Later when she sees a sign in the upstairs window saying "Halp Us" she is certain something is terribly wrong.

The narrative is told through the perspective of Gladys and Logan, outside the Wests' home, and from the point-of-view of the adults inside the Wests' home where Katherine and her children are being held hostage. As this is a character based drama, Trope allows her characters to push plot development forward and help create a sense of unease, tension, and fear. While the drama inside the home is disturbing and dangerous, Gladys is dealing with her own problems with her increasingly incapacitated husband. While out on his deliveries, Logan learns some bad personal news and must process that information until he is in a place to deal with it.

This compelling novel sets a quick pace as it switches between the various points-of-view in short chapters. This swift shuffling between the perspectives of the four characters helps keep the tension building while you try to guess exactly what is going to happen next in the life of each character. Trope is careful to develop her characters without revealing any of the secrets she wants to keep for later and will deliberately lead you toward the action packed final reveal and confrontation. (The title was originally Home Sweet Home and then changed to The Family Across the Street, so reviews of this novel can be found under both titles.)