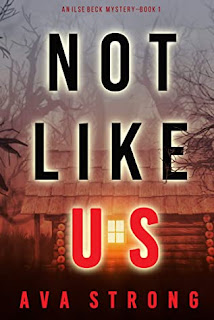 Not Like Us by Ava Strong is a recommended psychological thriller and the first book in the Ilse Beck series.

Dr. Ilse Beck is a psychologist who specializes in helping the survivors of serial killers. These survivors, her patients, are dealing with the PTSD. When Ilse has a new patient, Samantha, who survived being held captive and tortured by a serial killer twenty years ago but still struggles remembering details, Ilse begins to have flashbacks to her childhood. She is a survivor herself and suffered terrible abuse at the hands of her father. Samantha is sure that she is being followed and her captor from years ago is stalking her. At the same time a killer is loose in the area and two women have been found dead. Something happens to Samantha when she is one the phone with Ilse. After calling the police, Ilse rushes to the last known location of Samantha and meets FBI BAU (Behavioral Analysis Unit) agent Tom Sawyer, who is on those cases of the previous victims. The two end up working together in their search for Samantha.

Not Like Us is the first of four books featuring Dr. Ilse Beck working with the FBI and this first volume is the story behind her collaboration with the FBI and I'm assuming with Tom Sawyer. The other three books in the series are Not Liked He Seemed, Not Like Yesterday, and Not Like This. This is a quick read featuring a compelling search for a killer along with several gruesome and horrifying scenes. The opening pages will fly by as the killer chooses a victim, and you will want justice and be ready for the search. After that point, the writing and plotting becomes increasingly uneven. Where the writing shines the novel works well, however, the sections where it falls short lessen the impact of the entire novel.

Ilse Beck was actually an unlikable character for most of the book in many ways and a bit of an enigma. She has flashbacks of her traumatic, abusive childhood, which does elicit sympathy, but it also seems that she hasn't had the therapy she needs to move on and recover. Physician heal thyself, indeed. Tom Sawyer was much the same way only more of a taciturn curmudgeon. After being introduced to him in the narrative, I initially liked his character but, alas, he was sent down an irrational course of action which served to dampen my enthusiasm for the character. This was a quandary for rating. Parts were excellent and parts were not. I'm settling for 3 stars, recommending it with the hope that the series gets better.

Disclosure: My review copy was courtesy of the publisher/author via BookSirens.