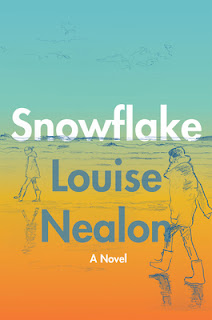 Snowflake by Louise Nealon is a highly recommended coming of age story.

Debbie is eighteen and commuting from the family dairy farm in rural Kildare County to attend Trinity college in Dublin where she is overwhelmed, learning how to hide, and depressed. While her life on the farm with her Uncle Billy and her mother, Maeve, hasn't been without drama and problems, they all love and support each other. At college in Dublin, Debbie makes one friend, Xanthe, although the two are seemingly opposites and Xanthe is the one who pursues Debbie's friendship. At home, although Debbie wants to pull away from her family, they offer comfort in their familiarity, although they drink too much and their behavior is often odd. Debbie also begins to drink too much in Dublin and is depressed. When a tragic accident shakes up her whole family, they all have to face some harsh realities.

The quality of the writing is excellent. The contrast of Debbie's rural life on the farm versus city life in Dublin is depicted realistically as is her uncomfortable transition between the two contrasting worlds. This contrast is also captured in the differences between the lives of Debbie and Xanthe, who have a connection in spite of their differences. The closeness and relationship between Billy and Debbie is believable and beautifully rendered. There is an element of magic realism in the plot. The growth and depth of the characters is wonderfully captured.  Everyone in the family have special gifts - Maeve and Debbie in their dreams and Billy in some special abilities. The frank inclusion of depression and the abuse of alcohol is realistically depicted in how it affects the characters. This is a very good debut novel and it will be interesting to see what Nealon writes next.

At the beginning of this novel I felt like it was more a new adult/young adult novel as the focus felt to was targeting a younger reader versus a mature adult reader. This evaluation did change as the novel progressed and the characters experienced some growth, but it needs to be mentioned. Once we learned more about Debbie's family and their struggles and gifts, it slowly became a better novel. I still feel that the target reading audience skews young, although I appreciated the character growth.